To collect 4 sets of 3 matching playng cards as shown on the Triplet cards.
Game Set-Up: Each player gets one card tray. Choose a dealer. Beginning with the player to his/her left, the dealer deals 3 Triplet (red back) cards, face down, to each player. Each player then places their 3 Triplet cards side by side upright in their card tray facing toward them, so as not to be visible to the other players. The dealer places the remaining Triplet cards face down in a pile in the center area of the playing surface. The 2 decks of “Triple Four” playing cards with green backs are shuffled together and the dealer then deals 7 cards face down to each player. These 7 cards are held in the player’s hand. The remaining cards are placed face down next to the Triplet card pile. This becomes the draw deck. Take the top card and place it face up next to the draw deck. This starts the discard pile. The game is now ready to begin.
Game Play: The player to the dealer’s left begins by drawing either the top card from the draw deck or the top card on the discard pile. The player tries to select any 3 cards from his/her hand that match one of their own Triplet cards. For example, if one of your Triplet cards says “Jack, Queen, King -all red”, and you have a Jack, Queen, King in either hearts, diamonds or a combination of both in your hand, you have a match. If you cannot match any of your Triplet cards, the player must discard any one of his/her cards in their hand and their turn is over. If a match is made, the player places the 3 matching cards face up in front of him/her so the other players can see them. The corresponding Triplet card is also placed face up on top of them. The player then draws 2 cards from the draw deck and 1 Triplet card. Do not discard. The player’s turn is now over. The next players proceed in the same manner.

If you have a Joker card, it can be used to represent any card within a group of 3 matching cards.

On your turn, after drawing a card, if you have 3 cards that match an opponent’s Triplet card already matched on the table, you can take it. Take your 3 cards and place them face up in front of you. Then take the pile of your opponent’s matched cards and place them on top, along with the triplet card. Draw 2 more cards. Do not draw a Triplet card and do not discard. Your turn is now over.

Play continues until one player matches 4 Triplet cards. That player is the winner! 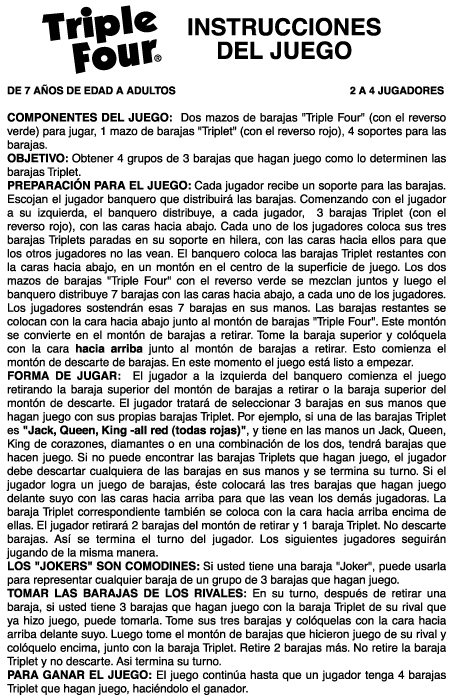