OBJECT: To be the first player or team to make a SEQUENCE – five chips in a row – with your colored chips – up and down, across or diagonally. When two players or two teams play, the best game is to play for a SEQUENCE of SIX in a row.

SET-UP: Place the board in the center of the play area, with the dice near it. Each player or team takes one colored set of chips, to be placed in a pile near them. In the two-player game and four-player team game, the third set of chips is not used.

PLAY: Each player rolls the dice and the player with the highest roll has the first turn. Turns then pass to the left. In the four-player team game, the first and third players play as partners against the second and fourth players. There must be no coaching among team members. Each team shares a common colored set of chips. For each turn, a player first rolls the dice. The player must then place one of their chips on an empty numbered space matching the number rolled (total of BOTH dice). Note that the board contains four spaces each of the numbers 2 through 12, except that there are no number 10 or number 11 spaces. If the player rolls a number for which all four spaces are already covered, then the player chooses any one of those spaces occupied by an opponent (including the 2 or 12 spaces), removes that chip and replaces it with one of the players’ own chips. If the player already has all four of these spaces covered with his/her own chip, then the player is out of luck and ends the turn, otherwise, after placing a chip on the board, the player’s turn is over.

IF A PLAYER ROLLS AN 11, which is known as a WILD roll, the player places a chip on any empty space on the board, unless the board is completely filled, in which case the player removes one opponent’s chip of choice and replaces it with the player’s own chip. This ends the player’s turn.

IF A PLAYER ROLLS A 2 OR A 12, matching one of the corner or middle “dice” spaces on the board, the player places a chip normally, AND THEN TAKES ANOTHER TURN.

THE WINNER: The first player or team to make a sequence of five in a row with only their own chips is the winner. The chips must be in a straight line and all next to one another. 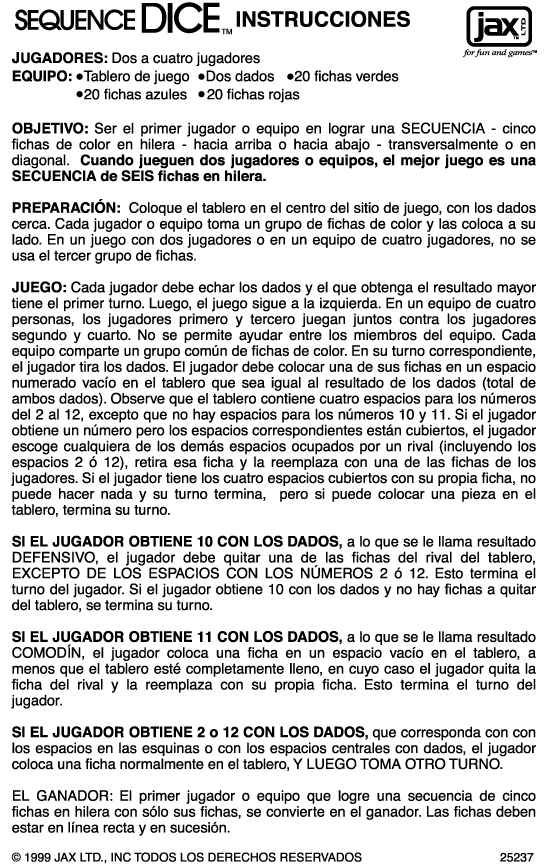