Over and Out – Game Instructions/Instrucciones

Object:
To be the last player left in the game. Players are eliminated when they lose all of their chips.

Set Up:
Choose one player to be the Dealer. Remove the five Tip Top cards from the deck. Shuffle them and place them face down in a separate pile. Shuffle all of the rest of the cards together.

As Dealer, deal four cards to each player, starting with the player on your left. Deal four cards to yourself last. Place the remaining cards face down in a separate pile. This is the draw deck.

Each player takes four chips of the same color. The chips signify the number of cards a player will hold in any given round.

Play:
The Dealer begins by turning over the top Tip Top card and placing it face up next to the Tip Top pile. The number on this card determines the top limit number – the “Tip Top” number. This number can only be changed by playing a Topsy Turvy card during the game.
(See game set-up example and Card Values below)

The player to the left of the Dealer begins the game. On your turn, select any card from your hand and place it face up next to the draw deck. This begins the card pile total.

After placing your card face up on the card pile, announce the new total to the other players, and draw a new card from the draw deck. Play passes to the player on your left, who then plays a card from his/her hand, and so on.

If, during a round, you are unable to play a card without causing the card pile total to exceed the Tip Top number, you lose the round and must forfeit one chip. The round is over. For the next round, you are dealt one less card. All players with chips begin the next round.

For example, if you started with four chips, but lost the last round, you would have three chips and be dealt three cards on the next round. If you lose all of your chips, you are out of the game.

Proceed with the next round. (You may choose a new Dealer if you like.)

Shuffle the cards. The Dealer deals cards to the players depending on how many chips they have. Shuffle the Tip Top cards seperately and then select a new Tip Top card. Begin play, starting with the player on the Dealer’s left.

Winning: The winner is the last player left in the game!

0 – Add nothing to the card pile total.

Spin Out – When you play this card, the direction of gameplay is reversed. In other words, if play is going clockwise, play now proceeds counter-clockwise from that player.

Topsy Turvy – When you play this card, you may draw a new Tip Top card from the top of the pile and thus change the Tip Top number. this card does not change the card pile total. 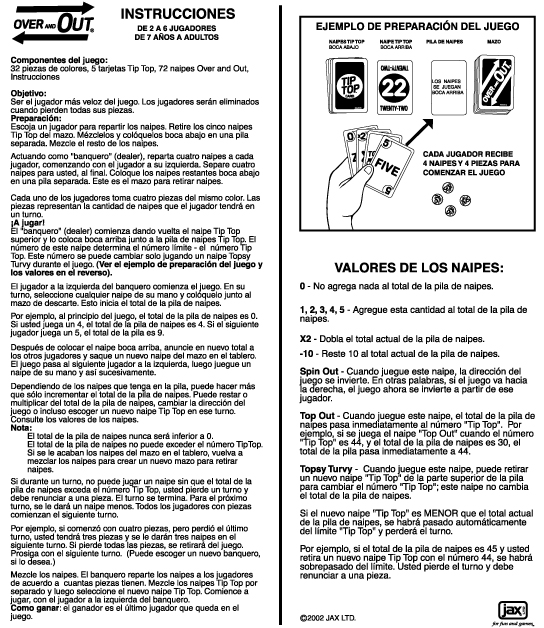