TO WIN THE GAME: Be the first to win 3 hands.

TO WIN A HAND: Be the first to play all of his/her cards.

Set up the MATCH’EM™ play mat on a table or flat surface. The play mat contains play stations for four players and a draw deck in the center. Place the nine Game Chips in the spaces provided surrounding the draw deck. SHUFFLE CARDS THOROUGHLY BEFORE EACH HAND.

Deal five cards to each player – face down. Place the remaining cards in the center of the play mat. Cut the deck to decide which player starts – high card goes first. If you are playing with more than 2 players, play moves to the left. First player plays any card in hand – face up, in his/her play station and announces the card total (each player must announce the card total as they play their cards). Second player must match the first player’s card total with one or as many cards that will add up to the total of the first player’s card (one match per play) and must display the cards in his/her play station. (Played cards must be exposed in such a way that other players may review the cards to assure accurate counting.)

EXAMPLE:
Player one plays a 10.
Player two matches with two 5’s.
Player three cannot match and must draw two cards from the draw deck, then plays a 6.
Player four matches the new card total of 6 with a 4 and 2.

First player to play all his/her cards wins the hand!! When you win a hand take a Game Chip from the center of the mat and place it in the space provided to the left of your play station.
First player to win three hands wins the game!! 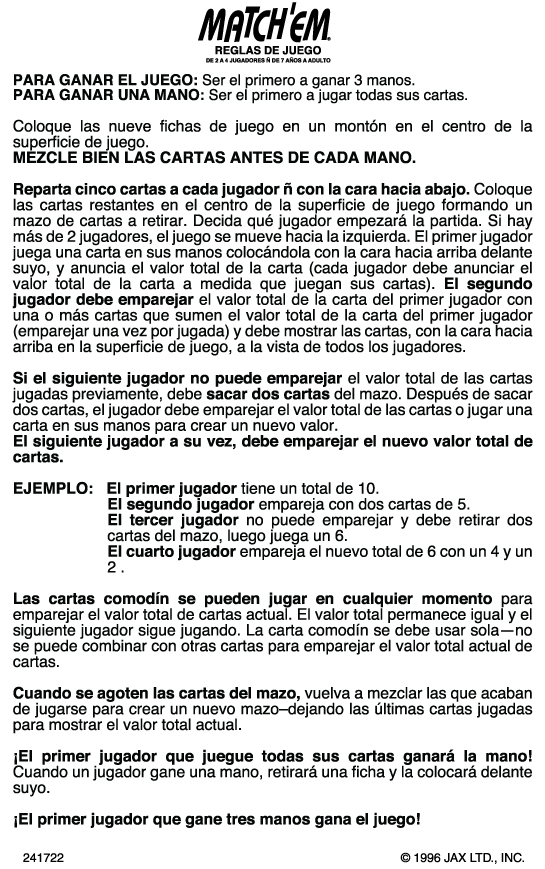