For 2 or 3 players: The first player to complete two “crowned” rows of stacking chips of one color. For 4 players (2 teams): The first team to complete three “crowned’ rows of stacking chips of one color.
A “CROWN” is completed one of 2 ways: Three consecutive stacking chips of the same color stacked vertically, or by playing a “crown” card, (see “SPECIAL CARDS” below). When a crown is established, the top stacking chip is turned over to reveal the white/black printed side.
A “ROW” is three consecutive “crowns” either across, down or diagonally. Rows of the same color can intersect. You may use any one of the spaces from one of your rows as part of another row. Five crowns in a row count as two completed rows.

Player to the left of the dealer starts by discarding one card of their choice from their hand, face up, in front of him/her and placing one of his/her stacking chips, printed side down, on any matching suit space on the game board. That player then draws one card from the draw deck and their turn is over. Play moves to the next player and each player continues in this manner. Players can place their chip on any open space or on top of any of their chips already played. Players can also place their chip on top of an opponent’s chip if all spaces of that suit are covered, unless there is a crown on that space. When a player has stacked 3 of his/her chips consecutively on one space, he/she turns the top chip over to reveal the white/black printed side. This signifies that a crown has been completed and it cannot be moved or played upon anymore. Occasionally, all spaces of a particular suit become covered by crowns. If you are holding a card in this suit, you may discard it and draw a new card. One card can be exchanged as part of your normal turn. If the draw deck runs out, collect all discarded cards and reshuffle to create a new draw deck.

CROWN CARD: There are 2 “Crown” cards in the deck. When a Crown card is played, it allows the player to place their chip on any space on the game board, except for a space already crowned. This automatically becomes a crown for that player. Three chips of one color are not needed when a Crown card is played. The player turns the chip over to the white/black printed side to signify the crown.

WILD CARD: There are 4 “Wild” cards in the deck. When playing a Wild card, you may place your chip on any open space or on top of an already-played chip of ANY color which is not crowned. All spaces of that suit do not have to be covered when using a Wild card.

DOUBLE-UP CARD: There are 4 “Double-up” cards in the deck. A Double-up card gives you 2 moves for that turn: First, you may take up to 2 chips from one of your spaces and combine them with your chips on another space. Chips used for “Double-up” moves must be open, i.e., if they are covered by an opponent’s chips, they cannot be moved or combined. As your second move, place a chip on any space that is not crowned, as if you were playing a Wild card. 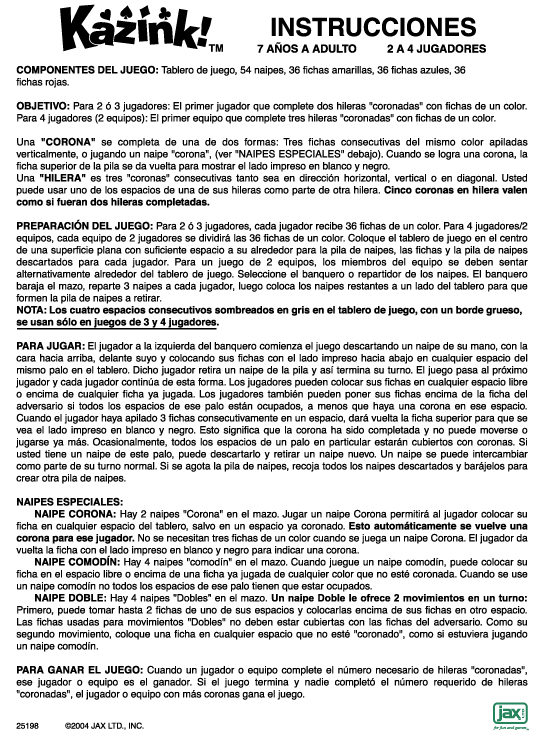